The 2016 Ine (New Yam/Iwaji/Traditional New Year) Festival of Onicha Ugbo, Aniocha North Council Area, Delta State, may have come and gone, but the memories it engendered will linger for a while among the townspeople and visitors that witnessed the event.

On Friday, September 2, the bustling town became a beehive of activities, as it marked this year’s Ine Festival, a key component of the norms and values of the town, which was the eve of the Ine Efife, the grand finale, which come with traditional dances and handshake (ina-aka) of the Onotu/Akpukpo Awolo chiefs (War Chiefs) with the traditional ruler of the town, His Majesty Obi Victor Chukwumalieze I JP, Agbogidi of Onicha Ugbo and Diokpa Umu Ezechime Kingdom.

During the Ine festival, which brings the entire community and residents of neigbhouring towns together, the six war chiefs – Iyase, Odogwu, Isama, Ozah, Uwolo and Iyase Agba, led by the Iyase of Onicha Ugbo, march to the Ezechime palace grounds to pay homage to the Agbogidi, bedecked in rich, colourful costumes and dance. Later in day, they would go to abu-ano (the spiritual heart of the town and meeting point of the four villages that make up the town) for the final lap, which is the idu-olu, the traditional cleansing of the town of all forms of ills by its enemies.

Prior to marching to the palace, the war chiefs, together with their warriors, usually dress gaily in red costumes and other supporters assemble at the residence of the Iyase in Ogbekenu village. They then walk a distance of about 3.5 kilometres through abu-ano, on to the palace grounds. Their arrival at the palace is preceded by heavy firing of the canons (egbe ani and egbe adaka).

The beauty of this ritual is that the king would not come out of his palace to receive them until he is impressed by the volume and intensity of canon fire. While waiting to be received by the king, the war chiefs and their followers continue dancing at the entrance to the palace. Fresh canon shots announce the arrival of the king, who is companied by his Anasi (queen/first or senior wife), escorted by the Olinzele Obi (palace chiefs), Ikpala Ani (senior noblemen) and senior princes.

Once the king is seated, the Iyase leads the other war chiefs to perform elaborate traditional dances to illustrate and re-enact their military prowess. They first of all dance together and then individually to the rhythmic beats and staccato of chants, wooden shields, drums and the native flute (akpele). They then dance individually and approach the king, give a report on the status of their individual villages, reassuring the king that the villages are calm and peaceful with no external threats. 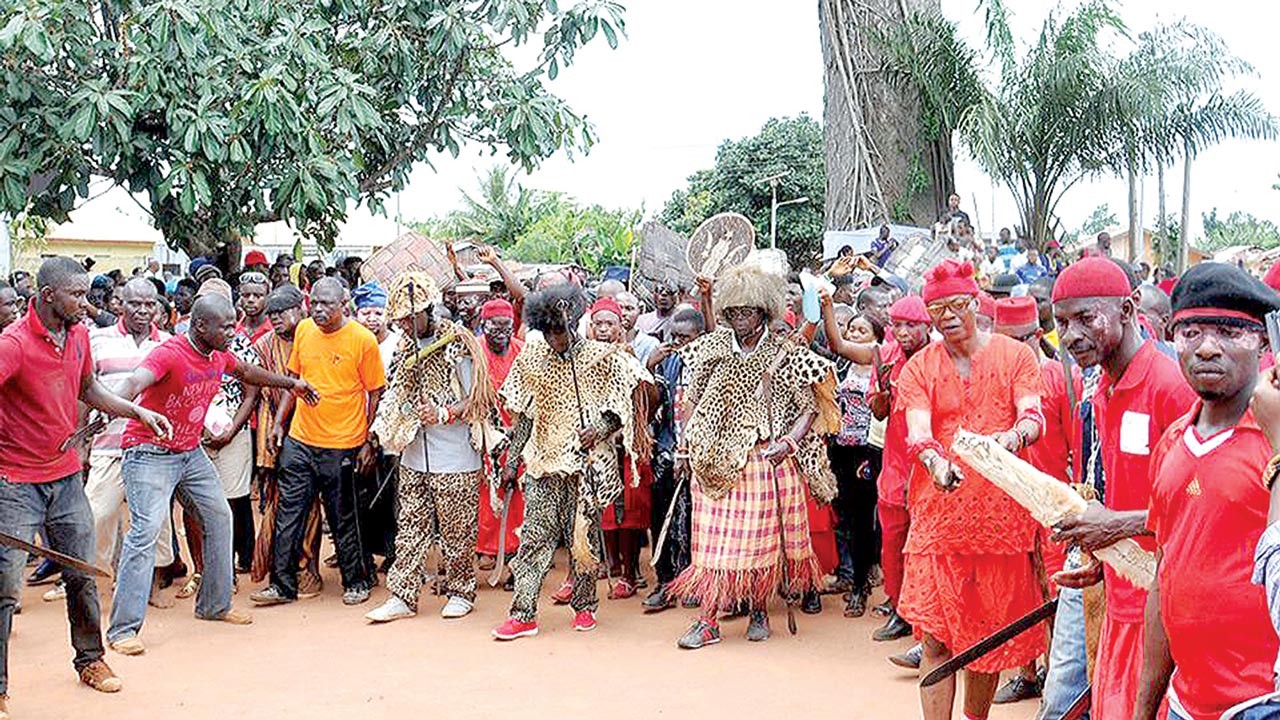 The ina aka ceremony ends, when the satisfied and elated king leaves the palace grounds with his Anasi and members of his entourage. The war chiefs also leave and the huge crowd disperses to prepare for the extremely popular Idu-Olu event, which comes later in the late afternoon.

Though an enclave within Onicha Ugbo, Agba is not regarded or treated as an ogbe (village); it is accorded a semi-autonomous status as it has its own ceremonial monarch (Eze Agba), who in turn, has an Iyase as his sole Onotu (war chief) because it never developed into a town. Instead, it became a part of Onicha-Ugbo, subject to the overall administration of the Obi of Onicha-Ugbo, a fact emphasised by the ancient popular expression: ‘Onicha aka ogbe ano (meaning Onicha-Ugbo of four villages). It is, however, now treated as an ogbe for administrative purposes.

ACTIVITIES for this year’s festival began with the ika ine ceremony, where, once a year, the obi, the Ikpala Ani (senior ozo title holders), the Onotu/Akpukpo Awolo Chiefs or War Chiefs), Olinzele Obi (Palace Chiefs) and the Omu (Queen Mother) assemble at the ogwa (the meeting court) of the Onishe (the most senior ozo title holder and number two citizen of the town) to determine the dates of major ceremonies and events that constitute the festival. The date, when agreed upon under the stewardship of the Onishe, are recorded and passed on to the okwelegwes of the various ogbes (villages) for dissemination to the public.

This year’s ika ine ceremony was held on Tuesday, August 9, 2016, at the ogwa of the Onishe of Onicha Ugbo, Chief Godwin Omu, in Umuolo, one of the four villages that make up the town. There are over 17 ceremonies that preclude the Ine festival, starting with Iloh Nze Ani and Iloh Fejokwu Ani.

Idumuje Ugboko controversy: What envy can do to us all.

List of Towns and Communities that Make up Anioma.