Magu: I have been insulted and embarrassed for serving my nation

Deposed EFCC boss can’t understand why he’s not getting fair coverage from the media.

Suspended Chairman of the Economic and Financial Crimes Commission (EFCC), Ibrahim Magu, is protesting his continued detention “without being informed of the allegations against him.”

Magu was arrested on Monday, July 6, 2020 by operatives of the Force Criminal Investigation Department (FCID).

He was then forcibly taken to the nation’s number one address to be grilled by the retired Justice Ayo Salami-led presidential probe panel.

Magu’s homes have been searched, his security personnel withdrawn and his belongings emptied from his office.

He faces allegations of corruption, insubordination and re-looting of recovered loot and assets.

In a letter addressed to the probe panel and written by his lawyer, Wahab Shittu, Magu said he has not seen the petition containing the allegations against him, nor has he been availed of the committee’s terms of reference. 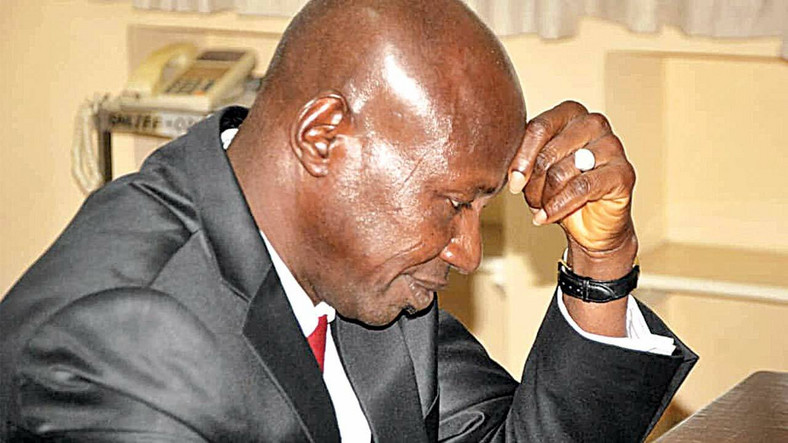 “Mr Chairman, since the 6th of July when our client honoured your invitation, he has been consistently applying to the committee to be given the petitions containing the allegations of CONSPIRACY, CORRUPT ENRICHMENT, ABUSE OF POWER/OFFICE, which request has not been honoured or obliged till date,” the letter reads.

“Our client has also informed us that he remains unaware of the terms of reference of this distinguished committee.”

Magu also expressed his discomfort at being detained for a week “without being informed of the allegations against him and the deserved opportunity to timeously study and respond to same.”

The embattled former EFCC Chairman says “witnesses are called and examined by the committee behind his back and without allowing him and counsel of his choice to participate in the proceedings involving these witnesses.”

The letter also criticized the press for treating Magu like a “common criminal” and for peddling false allegations, especially one that said Vice President Yemi Osinbajo received N4 billion from Magu–an allegation the vice president has since denied.

Such “unfounded allegations never featured in the proceedings of the committee thus far,” the letter reads.

“These campaigns of calumny have greatly affected the morale of our client and damaged his hard earned reputation and that of the commission (EFCC).

“Our client as a result of this campaign of calumny has been paraded like a common criminal and subjected to all manners of insults and embarrassment just for serving his nation diligently and efficiently as the arrow-head of the anti-corruption campaign of this administration.

“This unfortunate development is happening even before the determination of the petitions before this honourable committee with prejudicial consequences.”

The presidency has since announced Mohammed Umar as Magu’s replacement, while stating that the arrest and detention of the anti-graft boss is one more example that with the President Muhammadu Buhari administration, there are no sacred cows in the fight against corruption.

“There is no better indication that the fight is real and active than the will to investigate allegations in an open and transparent manner against those who have been charged to be custodians of this very system.

“Under this president and government, this is our mantra and guiding principle. There are no sacred cows, and for those who think they have a halo over their heads, their days are also numbered.

“Mr Magu was not immune — and regardless of the obvious embarrassment that potential acts of wrongdoing by him, given the office he held, may appear for the government.

“No other administration in the history of Nigeria would have moved to bring into the light and public domain such an allegation,” the president’s spokesperson, Garba Shehu, said in a statement.